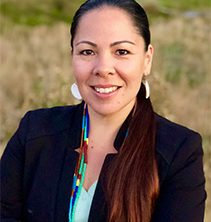 SEEDS, We Count Oregon, and the Reed Library collaborated to create a series of videos to discuss the 2020 Census with We Count Oregon, whose primary focus is to enumerate folks from hard to count communities. Check out the videos:

Se-ah-dom Edmo is Shoshone-Bannock, Nez Perce & Yakama, she has joined the #WeCountOregon team as the Tribal Community Coordinator. She brings deep experience in community organizing for racial and social justice work across the nation. She is co-editor of the Tribal Equity Toolkit 3.0: Tribal Resolutions and Codes for Two-Spirit and LGBT Justice in Indian Country and American Indian Identity: Citizenship, Membership & Blood. Prior to joining the #WeCountOregon campaign, she served as the Sovereignty Program Director at Western States Center where she was the coalition convener of Tribal History: Shared History (Senate Bill 13, 2017) in Oregon – this law established and funded teaching of Indian History and Sovereignty in K – 12 Schools across the state. A hallmark of her career has been fostering relationships and collaborations between tribes and organizations that do social, racial, environmental, and economic justice work across the region. She is currently a member of the Steering Committee of Oregon Recovers and is an ALF Senior Fellow. She lives in Portland with her husband James and their children Siale, Imasees and Miyosiwin, as well as her parents, Ed and Carol Edmo. Se-ah-dom’s ancestors are from Celilo, a fishing village along the Columbia River and one of the oldest known settlements in the West.